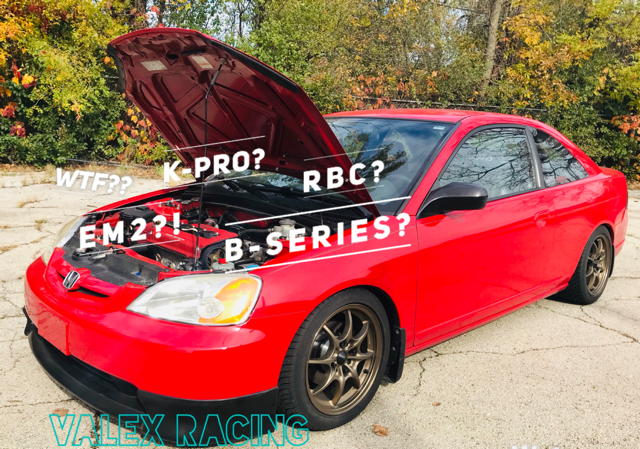 Interviewer:  Wow. Ummm, what made you want to put a B-Series engine into an EM2??

One6:  The main reason is because we’ve always wanted the challenge of designing and engineering our own parts to do a Honda swap that’s not commonly done. 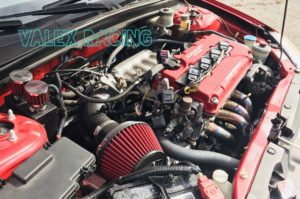 Interviewer:  Okay, but K-Pro on a B-Series?? Whats up with that? I mean, you have so many options like Hondata S300, why K-Pro?

One6:  First, we’ve really wanted the challenge of doing it since probably around 2004 and then we decided to make parts to install a B-series into a 01-05 Civic. It just made sense to us to do K-Pro.  Plus this car can easily pass emissions.  It became more of a priority once we started having distributor problems with our B-Series turbo drag car.  We tried a few fresh OEM Honda distributors with lower miles on them but we kept experiencing ignition issues at higher RPMs. We even changed to the Hondata CPR kit, however, that didn’t fix our problems so that gave us some motivation to just get rid of the distributor and make Hondata K-Pro work on a B-series. 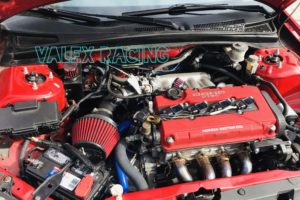 Interviewer:  Okay, okay, it’s starting to make a little more sense to me but there has to be more to it than that. Can you explain a little more about the setup?

One6:  It’s a 2003 Civic LX 2-door 5spd. with 64,000 miles on it. The car is super clean and it was 100% stock when we got it. With our years of Honda experience and thousands of Honda swaps and builds we actually put the engine in and made it all work pretty easily. That was more like our proof of concept everything worked and drove we were excited.   We made it run and drive and put some miles on it and that’s when we really saw the future of parts we could make and supply to make this swap someone can do on their own.

Interviewer:  Can you give us a breakdown of the engine setup and the car?

One6:  This engine we actually built about 7-8 years ago. It’s remained exactly the same since then. The engine is a B20 block 84.5 mm bore with cast NPR P30 Pistons and Manly I-beam rods. The head is 100% stock from my 2001 Integra Type R. The head has about 20,000 miles on it. This engine made 236 wheel horsepower and went 11.70 in our teal EG hatchback. The only thing we ended up changing in the head was the cams we put  Skunk2 tuner stage 1 cams in it.  It has a TODA header and as you probably can see, it has a K-Series RBC intake manifold with our K to B intake manifold adapter and a B-Series 70mm throttle body, stock RSX-S injectors and our Valex-Racing K-Series fuel rail. 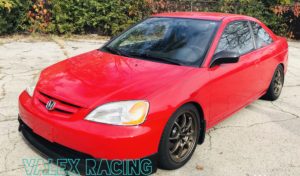 Interviewer:  My mind is exploding.  I have to know, what’s with the RBC intake manifold?

Interviewer:  So what’s next for the car and setup, where do you see this going?

One6:  It’s a work in progress. The next few things we are doing is a 3 1/2 intake out the front bumper with v-stack, a custom radiator and just simplifying making the car even better. We hope to get it to the track next year.  We are going to continue developing this swap we feel that as the older civics EF, EG’s, EK’s  and Integras go away that we can make a good swap option to put the B-Series engines into.  There are tons of these 2001-2005 Honda Civics around probably a minty one that your grandma is driving right now.  It could be your next race car!

Interviewer:  Alright man, well, thanks for sharing and good luck to you guys with all your future projects. Can’t wait to see what’s next.

Check out the one6 Motorsports online store division at www.valexracing.com